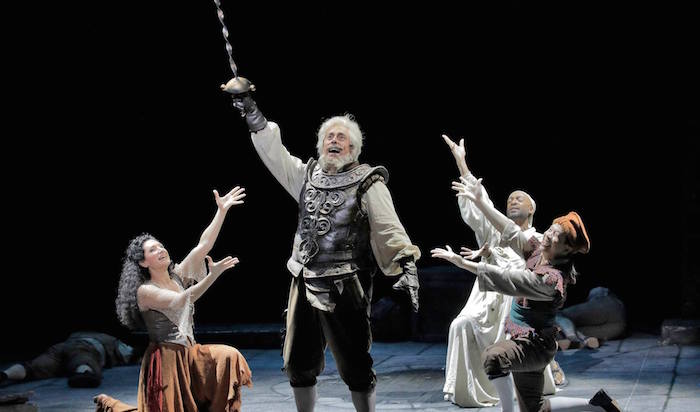 The return of the awards after a 10-year hiatus coincides with the 50th anniversary of the Oregon Arts Commission.

“Not only do the arts enrich our quality of life and local economies, arts education is key in fostering a spirit of creativity and innovation in our youth,” Governor Brown said. “The awards are a great way to celebrate Oregon’s artistic treasures and honor the impact they have had to our state.”

Oregon’s highest honor for exemplary service to the arts, the 2017 Governor’s Arts Awards will be presented during a ceremony at 8 a.m. Friday, Oct. 6, at the Portland Hilton Downtown. Admission to the ceremony, which precedes the 2017 Oregon Arts Summit, is free and open to the public but registration is required.

Award recipients were selected from a pool of 110 nominations received from across the state. The nominations were reviewed and scored by a diverse selection committee, which submitted its recommendations to Governor Brown for final award decisions.

“So many deserving artists and organizations were nominated,” said Arts Commission Executive Director Brian Rogers. “As a result, the review process was extremely competitive and we are extremely grateful to the members of the selection committee for their time and thoughtful consideration. Each of the award recipients has made outstanding contributions to the arts in Oregon and we are excited to honor them.”

The 2017 Governor’s Arts Awards award object will be designed and produced by artistMarie Watt.

About the 2017 Governor’s Arts Award recipients:

Crow’s Shadow Institute of the Arts, Pendleton: Community
Crow’s Shadow Institute of the Arts is celebrating its 25th Anniversary throughout 2017, culminating in a major retrospective of its published prints at the Hallie Ford Museum of Art in Salem. James Lavadour (Walla Walla) founded Crow’s Shadow on the Confederated Tribes of the Umatilla Indian Reservation, where he is an enrolled member of the tribes. Housed in a renovated Catholic mission schoolhouse, the arts center and print studio hosts a myriad of workshops each year, encompassing both traditional Indigenous arts such as basket weaving and beading, and contemporary printmaking. The Crow’s Shadow mission is to provide a creative conduit for educational, social and economic opportunities for Native Americans through artistic development.

Portland Opera: Organization
Founded in 1964, Portland Opera exists to share and celebrate the beauty and breadth of opera with our communities. In addition to presenting both grand and intimate opera, from the baroque period to the present day, Portland Opera offers K-12 arts education programs, free public performances in community spaces, partnerships with local libraries, parks, and businesses, radio broadcasts, and free events for the public, reaching 350,000 people annually across the region. Portland Opera reaches thousands of children and educators through a K-12 arts educational tour that travels over 5,000 miles across Oregon each year. Portland Opera to Go or “POGO” presents 50-minute English-language versions of classic operas and provides in-class workshops and lessons about opera and music and a teacherís guide. Over 12,000 children experience opera through POGO each year, many for the first time.

Arvie Smith, Portland: Lifetime Achievement
Arvie Smith was born in the Jim Crow South where he lived with his grandparents and great grandmother, a former slave. As a teen he moved to live in the de facto segregated areas of South Central Los Angeles and Watts. These early years laid the groundwork for his life’s work as a spokesperson for injustices toward people of color, an advocate for social justice for all oppressed people, and a painter. Smith’s work has been shown in New York, Baltimore, Philadelphia, Washington DC, New Orleans, Los Angeles, Seattle, Portland, and Florence, Italy. His paintings are in collections of the Portland Art Museum, The Reginald Lewis Museum of African American Art and Culture, the Hallie Ford Museum of Art, the Nelson Mandela Estate, the Pacific Northwest College of Art and the City of Portland, among others. Smith is Professor Emeritus of Painting at Pacific Northwest College of Art in Portland.

Esther Stutzman, Yoncalla: Lifetime Achievement
Esther Stutzman is a native Oregonian and traditional American Indian storyteller of Kalapuya/Coos heritage. She learned the stories from her grandmothers and she has been telling stories of the ancient ways for more than 50 years. She is a descendant of the Headman Camafeema (Halo) of the Komemma/Kalapuya and is an enrolled member of the Confederated Tribes of Siletz Indians. Stutzman works with Title VII Indian Education programs and Arts in Education Programs throughout the state of Oregon as a cultural resource specialist with children as well as with teacher in-service programs. She is the primary storyteller for Mother Earth’s Children, an American Indian theatre group that has performed for school assemblies and a variety of events and conferences for the past 42 years. She has been a long-time presenter for the Oregon Chautauqua History Series and is a recipient of several Oregon Historical Society Folk Life awards.

The Oregon Arts Commission’s mission is to enhance the quality of life for all Oregonians through the arts by stimulating creativity, leadership and economic vitality. The Arts Commission provides funding and arts programs through its grants, special initiatives and services. Nine commissioners, appointed by the Governor, determine arts needs and establish policies for public support of the arts. The Arts Commission became part of the Oregon Business Development Department in 1993 in recognition of the expanding role the arts play in the broader social, economic and educational arenas of Oregon communities.