Wisdom Guides in Times of Change 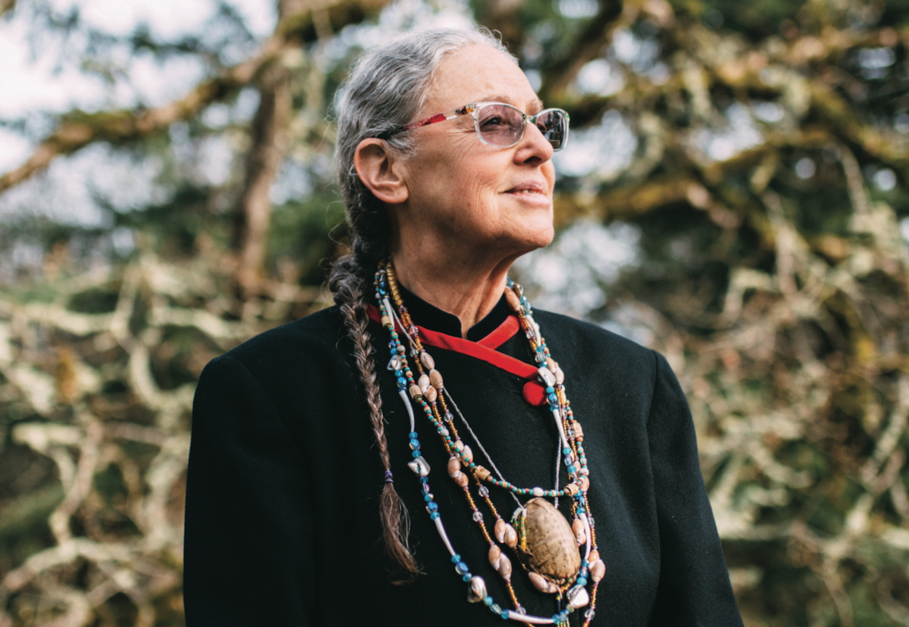 Arlie Neskahi’s voice is carried with clarity across space and time in a digital recording, an archive of Wisdom of the Elders Radio: Series One. Listening to his message reminds us that remembering is the opposite of amnesia. It is an action, happening even at the deepest levels of human consciousness and across the natural world.

Wisdom of the Elders co-founder, Rose High Bear poses on her porch in Salem.

Wisdom of the Elders, Inc. (Wisdom) is a Portland-based nonprofit with a mission to record, preserve, and share Native American oral history, cultural arts, language concepts, and ecological knowledge of indigenous elders, storytellers, and tribal leaders. The goal is to restore a traditional intergenerational model of oral learning that Native people have relied on for thousands of years.

In this work, to remember is paramount.

Rose High Bear, co-founder of Wisdom, is eager to share. High Bear is Deg Hit’an Diné from Alaska. “The Deg Hit’an Diné people are one of 12 bands of Athabascan up in Alaska,” she explained, “Our language is still spoken to this day but by a declining number of elders.”

It is a time of significant transition, both in the history of the organization and in High Bear’s life. After 24 years as Executive Director, including 16 of which that she also served as Executive Producer—High Bear will be shifting into a newly configured role within the organization.

“In my native language, there’s no word for retirement. Therefore, I plan never to retire,” High Bear said resolutely of her transition. “I think it sounds kind of boring, myself.”

High Bear’s future includes work as a senior consultant and furthering one of Wisdom’s initiatives in her current home county of Marion. But for the time being, she’ll stay on as Executive Producer, guiding film and radio production. “We live in a world where there’s an enormous amount of need for us to do our part to help…and so, I’m just changing it up just a little,” she said.

While High Bear has been at the helm of Wisdom for the majority of its existence (since its incorporation in 1993), her late husband Martin High Bear, Lakota medicine man, conceived of the organization and founded it with her help. “Martin had noticed that the elders back in his reservation—Cheyenne River Indian Reservation in La Plant, South Dakota…were going home to the spirit world and taking their wisdom and knowledge with them,” said High Bear. Knowing that younger generations were without this guidance, “He felt it would be important to record as many elders as possible and just save their messages.” 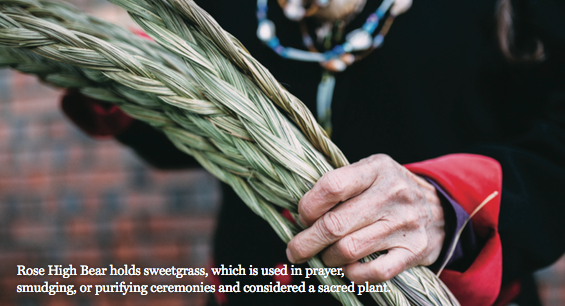 Nearly 25 years later, Wisdom has recorded about 450 elders, creating both audio and video content and broadcasting it through such programs as Wisdom of the Elders Radio and the Native Wisdom Documentary Film Series. Much of Wisdom’s recordings are still available on the organization’s website where they continue to have a broad reach. High Bear shared that approximately 2000 online visitors per month watch or listen to Wisdom’s programs, including students from Portland State University, Oregon State University, the University of Oregon, and the University of Washington.

At the time of our interview, Wisdom was also ramping up for a round of Native Wisdom Documentary Film screenings and Community Consultations in Portland, Salem, and at sites near the tribes of Oregon that collaborated on the documentaries.

“We don’t like to play a film, and then everybody goes ‘That was great, thank you.’ We want the public to ask questions about the issues we raise,” said High Bear. “We want them to ask questions about our cultural arts. We want them to express that they were not aware of the greatness of our cultural heritage because a lot of people have a narrow conception of Native Americans. And we are very colorful, dynamic, and highly intelligent people,” she continued, noting the diversity of the Native population in Oregon alone.

In addition to this ongoing work to record and preserve Native voices and knowledge, Wisdom has expanded its programming. “Perhaps, even more importantly, we have started developing a curriculum that’s tailored culturally to Native people.” These efforts, ongoing since 2005, are vital because, according to High Bear, “The learning style of Native people is much different from the rest of the world. Traditionally, we always learned at the feet of our grandparents and out in the world of nature. And to learn in a school, in a classroom, and out of books was not the traditional way.”

High Bear emphasized that Native children were historically “fluent speakers of their languages, which were rich in history, science, and culture. This fluency gave them a strong foundation to grow.” However, she continued, “With the advent of boarding schools, our children were removed from their homes and villages and lost that precious connection to their families and elders. They were punished severely in boarding school if they spoke their language, which is why so many of our languages are endangered and in the process of being restored while fluent speakers are still with us.” These memories are active, transcending the archives of history. 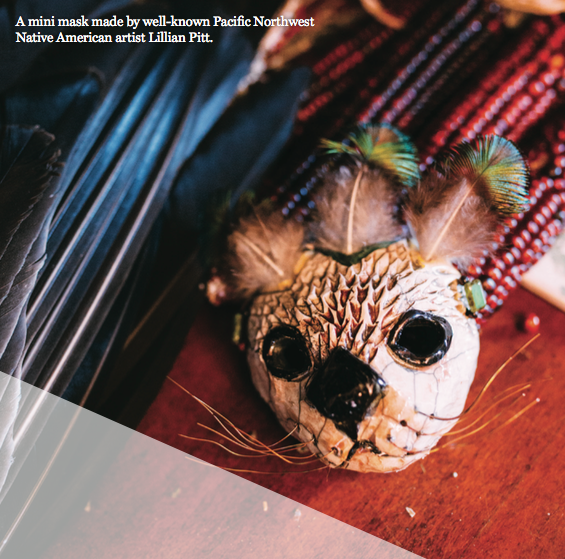 In the wake of this discovery, Wisdom has taken steps to present educational programs that support knowledge sharing across generations, collaborating with tribes, arts and cultural organizations, and educational institutions. Additionally, long-overdue changes are now afoot in the public education system. Oregon Senate Bill 13, which passed in 2017, directs the state’s Department of Education to develop curriculum relating to the Native American experience in Oregon and professional development relating to this curriculum for teachers and administrators. Wisdom anticipates that this will pave the way for the curriculum to appear in classrooms statewide.

Gerry RainingBird of the Nehiyaw Tribe (Cree), the organization’s incoming Executive Director, shared his vision for the organization’s future. “I just hope that I can come close to what Rose has meant to this organization, and I am hoping to do my best to continue the good work,” he said. RainingBird also expressed excitement about the organization’s nuanced approach to intergenerational knowledge sharing, which he described as “delicately balanced between what is seen and unseen, and what has been learned academically and what has been learned traditionally.” For RainingBird, who is also a powwow dancer, it’s vital to encourage Native youth to “speak up, stand up, and share with the world the importance of being Native.”

One such initiative, designed to build cultural identity and resilience, is “Discovering Yidong Xinag (The Old Wisdom).” This program brings young people out into natural areas to learn about restoring threatened and endangered species, conservation efforts, traditional first foods, and more. The hope is that this work encourages young people to stay in school and envision career paths that honor their elder’s harmony with and protection of the natural world. Also, Wisdom makes a point to integrate cultural arts into their educational programs, using an approach called STEAM—science, technology, engineering, arts, and math. “We include traditional stories and music in the classroom and during out-of-school activities in local natural areas and public events,” shared High Bear. “It’s more engaging to Native people with arts included.”

Wisdom’s collaboration with an array of partners on various programs is an integral expression of cultural values. “Our ancestors always emphasize respect and honor,” shared High Bear, gesturing to Wisdom’s desire for race reconciliation—part of the organizational vision. “We put a lot of emphasis on positive collaborative relationships with all of these partners. One thing about Wisdom and the vision of race reconciliation is that we try to never have a negative perspective. We try to never have a negative attitude toward our partners because we’re very grateful for them,” she said, noting the interchange of these partnerships.

For Wisdom, aspirations toward race reconciliation connect to a broad and longstanding vision for the health of the earth and humankind. “Our elders and our ancestors have a prophecy that stated that the day would come that the world will turn to Native Americans for their wisdom and knowledge on how to take care of the earth and also one another—and (how to) to relate with one another…To me, that’s something that we try to fulfill at Wisdom of the Elders.”

For a quarter of a century, Wisdom has responded to the severe systemic erasure, oppression, and mainstream cultural amnesia around Native experience by tirelessly amplifying the resilience of Native American peoples—and the keys to survival they may provide. The message is clear: Human survival is dependent on the health of the environment, and humanity’s fate is tied to the memory it maintains.

“When we’re talking about the prophecy, the fact that the world is turning to Native Americans in the future to learn how to take care of the earth,” said High Bear, “we need to let the world know that there’s a lot for them to learn about us, and we do want to share.” .