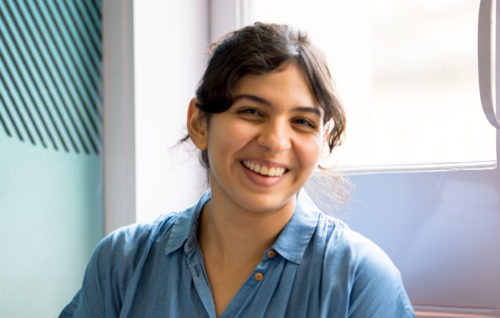 NWCT sat down for a special conversation with Avantika Shankar, the playwright of Chitra: The Girl Prince! Read on to learn more about Avantika and the show! Be sure to visit the Chitra Blog for more behind-the-scenes features at chitra.nwcts.org

QUESTION: Tell us a fun fact about yourself.

Avantika: I love sports! I swim and run, play tennis, I recently took up golf for a second, and do some lifting at the gym—being active is definitely a priority for me.

Q: Can you describe your experience working with NWCT, especially with Anita and Sarah?

A: I consider Anita and Sarah Jane my mentors. They gave me my first ever chance to be a playwright, and are still sort of holding my hand as I navigate this new terrain. Working with NWCT was absolutely great, everyone is super warm and kind and welcoming and I can’t tell you how thrilled I am to be allowed to be a small part of this community.

Q: What was your first experience of Tagore’s version of Chitrangada? Did you consider the context of Tagore’s work or focus more on the context you are writing it today?

A: It’s impossible to read Tagore’s original outside of the context of today— at a time when gender identity, gender expression and traditional gender roles are finally being talked about, explored, questioned, and laid claim to. The conversations are constantly in the air, they’re in my head, so it’s impossible to ignore that when you read the play, or when you adapt it for the modern-day audience.

That being said, I think Tagore was far ahead of his time. There is something so deeply poignant about his writing, he lets the audience experience their own interpretation of who Chitra really is—what her dilemma really signifies. It is more than just a conflict of gender identity—it has to do with desire and duty. I think, for me, Chitra’s problem of identity—the fact that she has to choose between one future and another, based on who she chooses to be, as a person—was very real, as it probably is for everybody at some point in their lives. I think people can really relate to that.

Q: Can you give me some insight on your creative process? What is your vision of the project? Ultimate goal? Is there a message you like to convey while writing a play?

A: It depends, really on the manner of story I am trying to tell, and on where my roadblocks are, which are unique to every project I work on. First, of course, I read the original play. My workshop with Mahesh Dattani, one of India’s premiere playwrights, really helped get me on track in terms of identifying the core elements of my story—what the story was about, so to speak—and establishing a basic structure. I think getting the structure, the bones of the play, is really important—you’re putting yourself in a leash so you don’t stray too far away from the essence of your story. And there is character work—who is this? What do they want here? Why are they going about it like this, rather than that? As I write dialogue I sort of put on a voice and say the words out loud—sometimes even an accent helps! You can’t really do that in a coffee shop or library, though, or you may be politely asked to leave. My motivation, the thing that pushes me to type one word after another, is that there’s a story I want to tell, and I’m looking for the best possible way to tell it. At the end of the day, the message is whatever the audience wants it to be. The story is simply a vehicle for the audience to do that work—to live those experiences, to conquer those dilemmas—for themselves.

Q: Adapting an epic story for modern day audiences is no easy task—what were some of the guiding principles that helped you along the way?

A: It is indeed tough to adapt an epic story for a modern audience— more so because I am adapting it for an audience that isn’t from the culture of the original story. In India, the Mahabharata and Arjun are part of the cultural consciousness, they need no introduction. Now I’ve got to introduce Arjun—to create that cultural baggage that surrounds him, in a story that isn’t even about him. And then of course, the play deals with a lot of very mature themes—I could spend a lifetime adapting the play for different audiences, different communities, it’s so rich, it has so much nuance and complexity within it, it’s amazing. So I had to pick and choose what was relevant to the story I wanted to tell— and for that I, of course, needed to identify what it was that my play, my Chitra, was going to be about. Stories are universal, they defy culture and context. As long as you work backwards, bones first, you’re going in the right direction.

Q: What were some of the techniques you used to bridge time and culture?

A: When a story is good enough, universal enough, it is in and of itself the bridge between time and culture— so you do justice to the story, and the rest sort of follows. I’ve lived in the States enough to know what is and isn’t instinctive cultural knowledge, so I know when to step back and explain something and I also know when to give the audience credit and say, “Maybe they’ll get that this is what this means, so let’s leave this here with zero explanation.” And readings, and regular feedback help as well!

Q: Both Anita and Sarah are so excited that you will be here for the opening of the show. How are you feeling about seeing your words on paper come to life?