Chitra’s story began long before her first appearance at NWCT. Our heroine, whose full name is Chitrangadha, first appeared as part of the Mahabharata, an epic myth from ancient India. 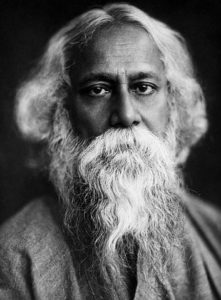 the Nobel Prize for Literature! Tagore was ahead of his time, and known for breaking down cultural boundaries. In 1892, he created a dance-drama called Chitrangadha, which put the story of the princess front and center. The story was met with great success, and Chitra became a much-beloved character across India and the world.

Fast forward another hundred years or so, and you’ll see how Chitra wound up on the NWCT stage. Directors Sarah Jane Hardy and Anita Menon had just finished their 2015 production of The Jungle Book, and were eager to work together on another piece that fused the worlds of western theater and Indian dance. Inspired by Tagore’s progressive spirit, and NWCT’s tradition of re-making classic tales, the two decided to take on the story of Chitra.

After close collaboration with playwright Avantika Shankar and an incredible team of theater artists, musicians, and dancers from both the Portland Bengali community and India, the story of Chitra: The Girl Prince is ready for the stage. While her tale may be ancient, this production confronts many issues that we grapple with today; gender roles, duty to family and to country, and our never ending road to self-discovery. NWCT hopes you enjoy watching this play as much as they enjoyed creating it.