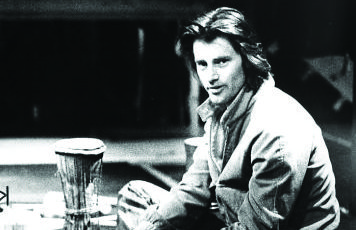 Through his mind-bending and heart-breaking plays and prose, he bared his soul and swagger while traversing our primordial pasts. For five decades and change Sam has been in pursuit of the bones buried out back, of the visceral energy and emotional tension that makes us human. It’s hard to imagine a world without him.

His restless, rhythmic, imagistic dialogue made actors kill to speak his words aloud—to explore the space Sam left around the words. Those early iconic performances of Gammon, Harris, Baker, Coyote, Sinise, and Malkovich cemented our hope that maybe, just maybe, we too could be a part of something as primal and true.

The ravishing wilds of California from Homestead to Napa Valley indisputably evoked Sam’s imagination, producing a staggering cannon of 55 plays, 5 collections of prose and 50-plus film performances. Here, at the edge of the West, hanging off the San Francisco Bay, Sam wrote and premiered seven of his seminal works at Magic Theatre, including Buried Child (his Pulitzer Prize winner), True West, and, in 1983, (the same year he would be nominated for an Oscar) Fool for Love. His singular brand of muscularity was forever baked into our consciousness and the ferocious, visceral primacy of his texts ignited a new play fever that spread throughout the Bay and well beyond. With a natural intensity, he was an iconic, if reluctant, film star and his many roles portrayed him as a cool product of the West whom we believed could tame the frontier.

We forged a friendship over what would be, unthinkably, the last five years of his life. Slumped in Magic’s audience, legs dangling over the theater seats in front of us, he argued vehemently with me over the ending of a play I was directing (not his). He attempted to explain the craft of hunting geese versus deer and encouraged me to read one of his favorite novels (I tried unsuccessfully, the book—not the hunting). Years later, over tea one afternoon in the East Village, he joyously recited Beckett and with misty eyes shared the humility he felt in making what would become Tongues, with his dear friend, Joe Chaiken.

Sam refused to play wise sage. He remained beautifully broken from his first plays in ’64 to his last book of fiction published in 2017, combing the open road for visages of his lost father, the bygone West of his youth, and America’s forgotten promises.

I last saw Sam in Healdsburg just before he would head home to Kentucky at the end of March. Over cups of coffee, Sam and his astounding sisters Sandy and Roxanne shared with my partner and me photos of his cherished ranch, the horses he missed dearly and the astounding beauty of that land. We discussed Diebenkorn’s work and Sam pondered the origin of the Beatles’ Blackbird. Before the afternoon was over, he dictated a dedication for Magic’s 50th, for Ed Harris to present. Sam asked to hear it out loud. Roxanne read it back patiently several times and with each pass Sam listened intently, making small, careful revisions.

In spite of his declining health, he was profoundly himself. Curious. Searching, like the rest of us. Making sure that as the words hit the air, they were right.