WHEN PEOPLE LEAVE PORTLAND for jobs in another city, all good journalists understand that they have just opened a door, not just on a new future for themselves but on the past, too. Or at least a more candid view of the past they shared with us while they were here. Nothing like putting a city and a job in the rearview mirror for loosening the tongue about the place they are leaving.

Not that anyone leaving Portland for Denver these days—as Portland Center Stage Artistic Director announced he was doing last November after 17-and-a-half years here—can feel entirely unrestrained in conversation with a journalist. The more “dynamic” parts of such an interview will inevitably cross the Rockies. But still, at the very least, the leave-taking interview, the exit interview, can lead to a reflective state of mind that can be very valuable for those of us who remain.

In February, just after Coleman’s epic farewell to Oregon, Astoria: Part Two, opened, we got together on the mezzanine level of The Armory building, home to PCS to talk about anything Coleman wanted to discuss. For our purposes here, I’ve focused on the very first topic and slightly edited Coleman’s responses for length and clarity.

What were the biggest challenges you faced when you started at Portland Center Stage? The biggest challenge you faced in the middle of your run here? The biggest challenge your successor will face? The biggest challenge when I got here was moving the programming. I think the board was hungry for more adventure; the staff was hungry for more adventure, but nobody had checked in with the audience. And so I leaned forward at their encouragement, and I leaned too far forward, I think, initially. If I had to do it over again? Julie Vigeland [who was the board President of Center Stage when Coleman was hired] and I have wrestled with this over and over. If I had it to do it over again, I think I would have been a little more evolutionary than revolutionary, because I think I could have kept more people in the fold longer, and it would have made for a less difficult first couple of years. Julie feels like, you know what, we needed to say things have changed, and this is where we’re going.

It was painful emotionally. It was painful financially. And it was scary initially. So it was definitely trying to figure out, where is this community or this audience for this organization aesthetically, and how does that fit with what I want to do, and how do we line up a little bit better? That was huge. And then, the organization was tremendously under-resourced for a company that was trying to fill 900 seats [in the Newmark Theatre]. The budget my first season was $3.2 million, and boy, that is a brutal equation. So selling the vision, trying to figure out where the community was, and trying to increase our resources so we could put better work onstage, those were the biggest challenges early on. 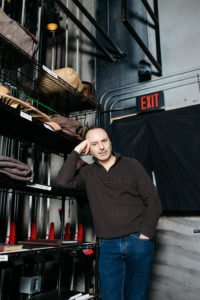 There were so many people in the community—and probably rightly so—who didn’t believe we were ready or that we could pull it off. We were 15 years old at the time, and we didn’t have the deep donor base that could give those big gifts. So that was hugely challenging. And there were so many times when it looked like we just should have said, ‘OK, it’s not going to work. Good try.’ But luckily we’re here in Year 11 in the building [The Armory], and it’s been humongously successful. It’s a fantastic building.

What challenges are you leaving Center Stage with that your successor is going to have to wrestle with? They are just beginning the search for my successor. What will they have to wrestle with? Luckily, there’s not much to fix right now. The senior management team is super strong and talented and creative and funny. Ticket sales are up: Ten thousand more tickets last year than the year prior. And subscriptions are up this year by almost a thousand. Donations are increasing. So there are a lot of trendlines that are moving in really good directions. I think the challenge will be coming in and inspiring the board and the audience base and patron base through the work and through your vision to take it to the next level. Because I really do think the organization is poised. I think it’s really thought of very well nationally, and it’s poised to be one of the top five, six, theaters in the country. And that’s going to take a deeper financial investment than we have inspired yet. But the pieces are in place if the next person comes in and inspires people.

What does that next level look like? It’s more resources to say “yes” to more work of scale, so Astoria is not such a once-in-a-lifetime thing, and it is the ability to say yes to more development of new work, perhaps the development of new musicals. That is the area that I think we’re just right behind the top five or 10 regional theaters in the country. They just have deeper resources to be able to say yes to projects that then go on to raise the profile and create more of a national conversation about the work that the organization is doing.

Every play you do is a risk. Whether it’s Hamlet or Oklahoma, every play you do is a risk. You cannot predict who is going to show up, [whether you’ve] set your income numbers well, but a new work that’s untried with an author that may or may not have marquee value is an added risk. Like any R & D in any organization, you have to have financial support that lets you invest in a way that you are not expecting an ROI (Return On Investment) immediately the way you would on a regular production.

I think artistic risk is the same question. It is a lot easier to have the appetite to lean forward if your financial house is in good order, and you know that you are not endangering the solvency or long-term health of the organization by putting the play onstage. OK, maybe you’re going to take a hit on that one, maybe the audience didn’t show up for that one. OK, what can we learn from it? But it’s not putting the organization’s future at risk.

I learned it over and over and over. I think just when you think you’ve figured out what the audience is going to show up for, they surprise you, and I think that’s just the nature of this business. So especially on new work, you try to be conservative on your income goals. But there’s always a battle in my head between the part that just wants to leap forward and go for it artistically, and the part that is really aware of the institutional costs if the audience doesn’t show up or it alienates a particular pocket of the audience too deeply.