Downs belts canciones that’ll move you to dance, cry, swig mezcal, and raise your picket signs proudly. Artslandia caught up with her in anticipation of her October show with the Oregon Symphony in Portland. 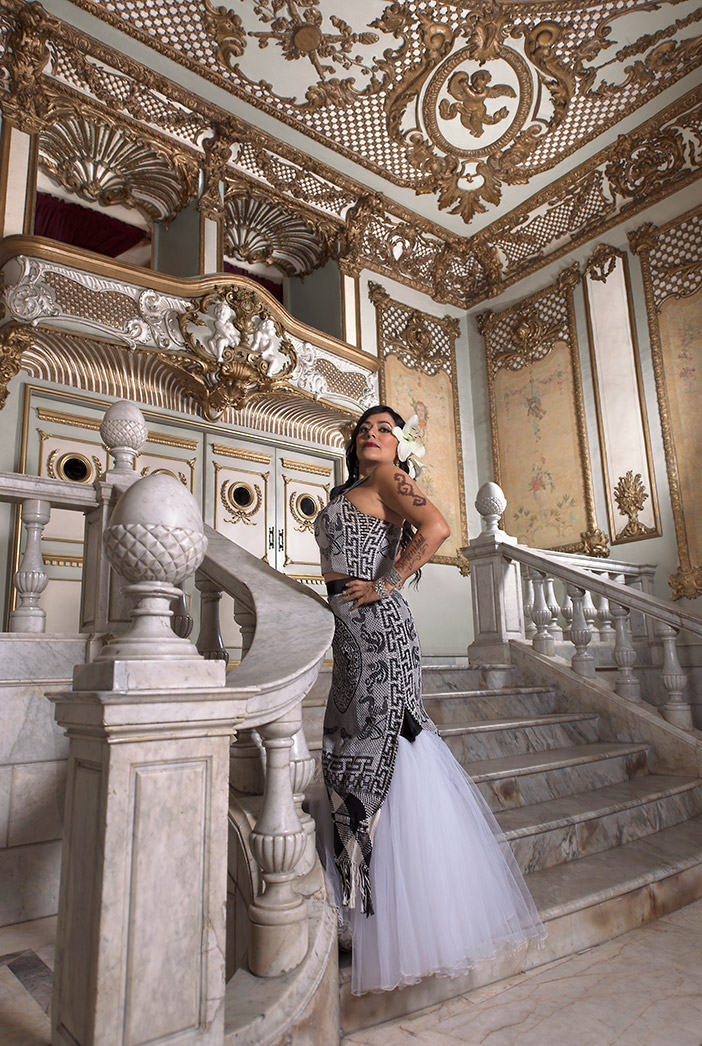 M exican-born musician Lila Downs makes music for the people. Long before carving her own niche in the musical landscape with her self-released debut album, Ofrenda, in 1994, winning a Grammy and several Latin Grammys, or studying classical voice as an undergraduate student at the University of Minnesota, Downs began singing songs steeped in tradition just a few short years after learning to use words. “I was five or six when I imitated the performers in old films with Pedro Infante and Lola Beltrán,” she says. “I think, by nature, I was attracted to those songs.”

While holding intense love for culture was a household keystone for Downs’ parents—a Mixtec cabaret singer and a Scottish-American professor of art and cinema—it was an outlook Downs herself had to work diligently toward throughout her life to fully embrace. Now, she commands international audiences while decorated in vibrant huipils and rebozos, her thick black hair woven in braids with satin ribbon, and bellowing songs in native tribal languages, but embracing her rich indigenous roots wasn’t always second nature.

“I happen to be from an Indian, or Native American, family in Mexico—the Mixtec—but I wasn’t taught to be conscious of that when I was younger,” she says. “You learn what you’re taught and [in Latin America, it] is usually about trying to erase your Indianness and trying to be more European or Spanish. That is a constant contradiction in our identity, and it continues to be an issue in all of Latin America. It’s the story of a lot of us Latin people. [It’s] what we are taught in schools and our socialization.”

Downs grew up in flux, evenly splitting her time into yearly intervals between the United States and Mexico with her family, but confrontations of her biculturality were constant on both sides of the border. “On top of being kind of denied by our Anglo family and Anglos around me in the U.S., [indigenous people] also [experience] a denial of existence, in a sense, so it’s very difficult to be proud of yourself,” she says. “I ended up having a crisis of identity.”

When Downs was 16 years old, her father suffered a heart attack and died suddenly. In addition to losing a parent, she felt like she was losing a tie to the U.S. and a tie to the identity she learned to be synonymous with value. “I was left with my short and dark Indian mother with a thick [Mixtec] accent. I was very unhappy and uncomfortable,” Downs says. So, she left to the United States to become a Deadhead (a fervent follower of musical group Grateful Dead) and spent years roaming without a clear sense of direction or purpose. But on one fateful trip back home to the Tlaxiaco valley of Oaxaca, Downs’ mother sat her down for a frank conversation.

“I remember she locked the door to the room and said, ‘OK, we’re going to have it out now,’ says Downs. “I said to her, ‘I’m ashamed of hanging out with you because you don’t speak correctly.’ She confronted me and [asked why.] That’s when the turning point started.”

By singing in indigenous languages such as her native Mixtec and Zapotec and Nahuatl, Downs reclaims her heritage while offering a spotlight for the languages and peoples pushed to the margins for centuries. Even when Downs hasn’t experienced a particular struggle, such as crossing the perilous U.S.-Mexico border, her deep empathy for others and aptitude for songwriting and storytelling serve as a profoundly influential podium. Her musical journey also shares her continued and relevant story of unlearning and rejecting the potent, lingering effects of colonization on the Americas.

Salón, Lágrimas y Deseo (2017), her 16th album and latest release that winds subtly between genres, won her a fourth Latin Grammy for the Best Traditional Pop Vocal of 2017. On “Peligrosa,” Downs channels the deep-reaching howls of Chavela Vargas’ dramatic rancheras and showcases her everlasting operatic vocals, while “Urge” opts for a mystical, horn-heavy cumbia soundscape. Indie singer Carla Morrison joins Downs on the downtempo ballad “Ser Paloma,” which pays tribute to the strength of women and speaks out against domestic violence. The music video debuted earlier this summer and featured 50 cisgender and transgender women and girls of varying ages, nationalities, and occupations, perfectly epitomizing her continued commitment to social justice and equal representation for all.

Although indigenous rights and women’s rights have slowly garnered more attention on a global scale over the past few decades, Downs knows the collective fight is far from over.

“We have a lot of stigma and racism and ethnocentricism toward original peoples of the Americas to overcome. We still have to work very hard to legitimize our lives. We are on the sidelines of society.”

In addition to creating music fueled by equal parts passion and protest, Downs engages in further political activism by speaking boldly against the oppression of all peoples, encouraging people to vote, and joining nonviolent, nonpartisan initiative El Día Después to urge for peace following the 2018 Mexican presidential elections. Downs is also, naturally, currently working on her 17th album.

As she gears up to visit Portland for her show at the Arlene Schnitzer Concert Hall and continue her tour of the U.S. alongside the likes of Emmylou Harris and Jackson Brown with the Lantern Tour: Concerts for Migrant and Refugee Families, she says she’s excited to continue helping foster community through her work: “I believe that music can really change society.”

Lila Downs performs with the Oregon Symphony on Monday, October 22, at 7:30 pm at the Arlene Schnitzer Concert Hall.