In the Spotlight: Samantha Wall

Visual artist Samantha Wall leads Artslandia through her creative process and shares insight on her sources of inspiration and hope.

“I feel more like an immigrant than I’ve ever felt,” says Samantha Wall, a Korean-born Portland artist, of the current political climate.

The last time she experienced this sense of insecurity, she was a child transplanted from South Korea to South Carolina. “That young,” she says, “I wasn’t really able to process it. Assimilating is so much of a part of the fiber of my being.” And it’s from this complicated, emotionally nuanced experience that Wall explores with her art. Her most recent body of work, Inheritance, presents “the story of an immigrant family, told in a way that’s very honest, both beautiful and agonizing, so the truth of it is undeniable.”

Wall credits a move to Portland from South Carolina in her early 20s with granting her first opportunity to let her guard down and figure out who she was as a person and as an artist, finally “able to shed the internalization of other people’s expectations, fear, and anger.” She clarifies,

“I don’t want to diminish it or make it seem like there aren’t problems in Portland, because there are, but I also feel like there are a lot of people here that are open to listening.”

Since her move to Portland, Wall has accumulated an impressive roster of accolades, proving that people are, indeed, listening. She earned her MFA from Pacific Northwest College of Art in 2011 and has since won a Hallie Ford Foundation Fellowship from the Ford Foundation, the Arlene Schnitzer Prize from the Portland Art Museum, two residencies at the Joan Mitchell Center in New Orleans, and the Golden Spot Residency Award at Crow’s Shadow Institute of Art.

Holding the attention of so many people has given Wall a sense of responsibility to be a positive role model for fellow artists and people of color. She serves as a mentor for MFA candidates at the Pacific Northwest College of Art and, this past year, she worked with fifth-graders at the ethnically diverse Martin Luther King Jr. School in NE Portland through the King School Museum of Contemporary Art. Wall showed the children how to use the same materials she’d been working with for Inheritance—India ink and water. “I was worried that the students would be frustrated with the process,” she says, “but they were at ease from the beginning. They were like sponges. They were fearless.”

Wall herself appreciates the unpredictable nature of the India ink, and it’s part of the reason why she’s featured it so prominently in her recent collections. “This way of working with ink and water can be kind of chaotic—there are so many variables,” she says, “and I think that’s why I’ve grown to enjoy it so much. Lately, I’m drawn to this process of surrendering to the materials, and there’s something very freeing about that.”

Every piece Wall creates begins with human contact. For her previous body of work, Indivisible, she took as many as 700 photos of each model while engaging them in conversation to help them forget about the camera and capture what Wall calls, after Roland Barthes, the “air” of the person. 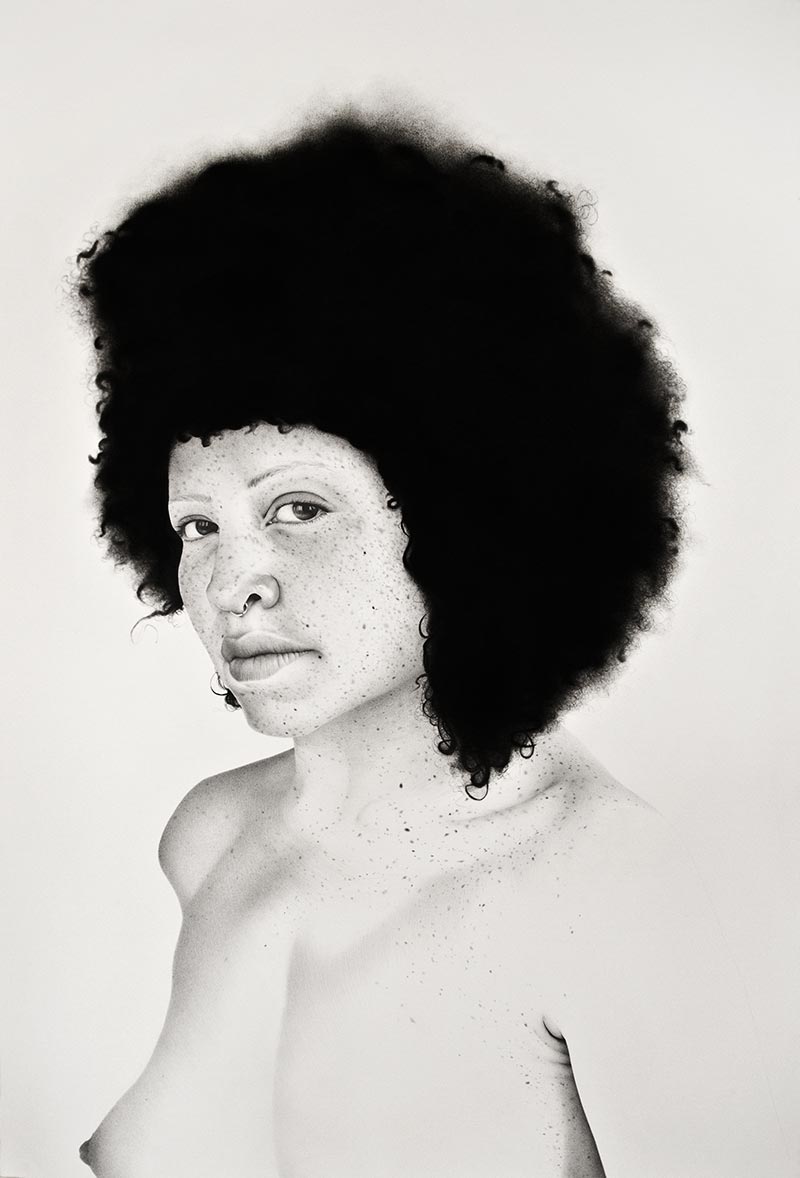 A painting from Invisible. Art and photo by Samantha Wall.

For Inheritance, the process of collecting subject matter began a bit more organically. Wall felt the first inspiration for the series at a recent family gathering in South Carolina to celebrate her mother’s 60th birthday where she was able to capture the essences of her female relatives on film like never before.

“It’s the women in my family who have been an inspiration to me,” Wall says. The collection includes seven haunting, abstract portraits in India ink and gold leaf that evokes a sense of mythos. Her subjects’ faces dissolve into swirls of ink that seem so fluid it’s almost as if they haven’t had the chance to dry, yet in almost every painting, photo-realistic eyes break through the aqueous mask, making direct, unwavering eye contact. Their wispy forms, when paired with the word “inheritance,” seem to comment on the amorphous shape immigrants’ identities can take when placed in new contexts.

In addition to the portraits, Inheritance includes six images of golden rings also inspired by her mother’s 60th birthday. Turning 60 is a significant milestone in Korean culture, in part because the life expectancy of the population has historically been short. A traditional first birthday gift for a Korean baby is a hefty gold ring, the start of the child’s savings account. In exploring Korean rituals like this in her art, Wall says she’s discovered a “wealth of history and culture that fuels me. It’s allowing me to push some of that negativity aside, and I’m finding a way to move forward.” 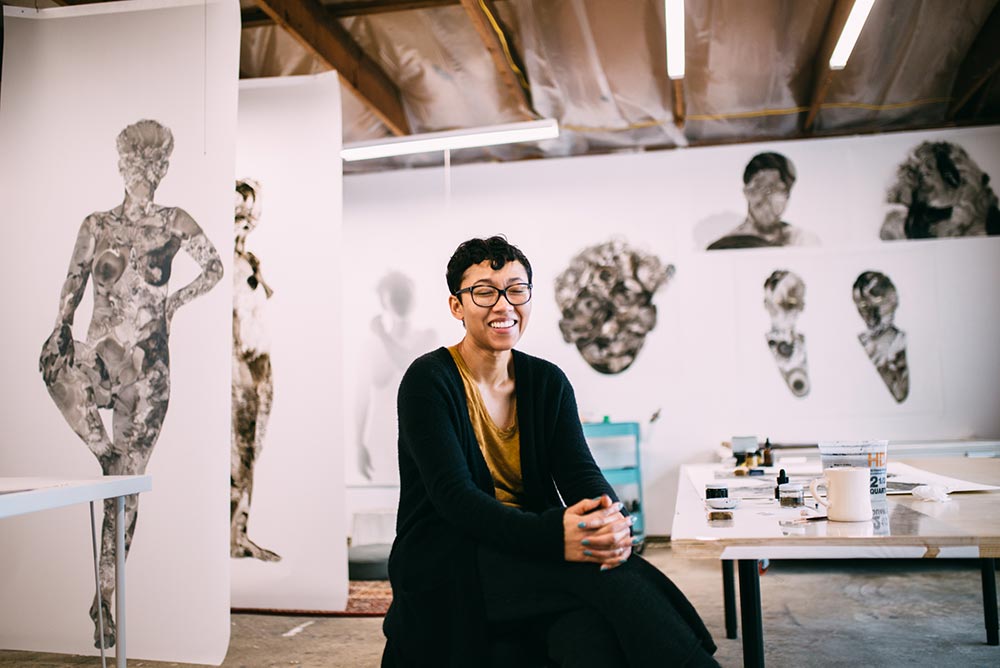 Samantha Wall in her studio, with portraits from Inheritance. Photo by Christine Dong.

For her upcoming body of work, Phantom Limbs, Wall is continuing to explore Korean culture as a lens for examining her personal experiences. She lost her sister several years ago, and the American funeral didn’t seem to honor her sister’s memory or to bring comfort to her mother. The new work, she says, “is a way of coming back to the beginning of our story and reclaiming my family’s identity, and creating a tribute to my sister… I feel like it’s renewing me.”

With current events becoming less and less a source of hope, especially among immigrants, one must find revitalization wherever possible. “Inheritance and this newest body of work are me finding a way to move past the initial reaction of fear and rage and this deep sadness, trying to reach out to something that’s larger than me,” she says.

“I love being able to create something that helps to shape the world in a way that I want to experience it.”