Then & Now: The Armory 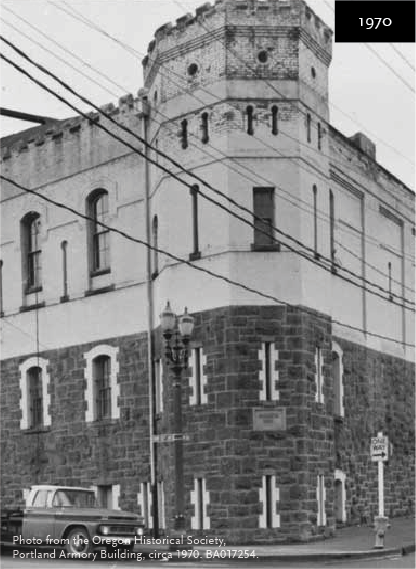 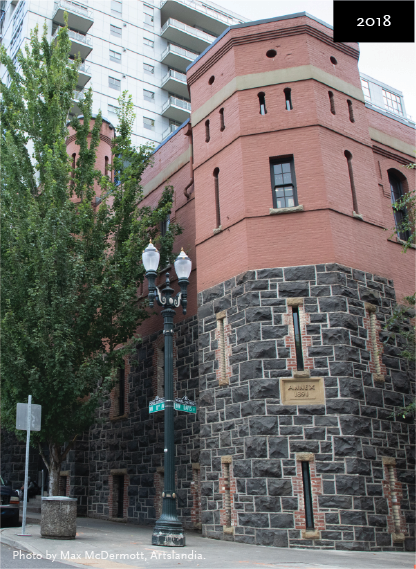 uilt to house the Oregon National Guard, The First Regiment Armory included an Annex in which the soldiers trained. The building, one of the few community spaces available at the time for large crowds, also hosted movies, concerts, speeches, and even amateur boxing matches. In 1911, former president Theodore Roosevelt, current president William Howard Taft, and future president Woodrow Wilson held a rally there. In 1928, both buildings were deemed unsafe by the Fire Marshal, leaving the structures to fall into disrepair. Brewer Blitz-Weinhard purchased the property in 1968 and demolished the main building. In 2006, after a $36.1 million renovation, the Annex reopened as Gerding Theater at The Armory, home to the largest theater company in the city: Portland Center Stage. Now named simply The Armory, the facility houses the 590-seat U.S. Bank Main Stage, the 190-seat Ellyn Bye Studio, administrative offices, a rehearsal hall, cafe, bar, and production facilities. The Armory was the first LEED Platinum-certified building in the Pacific Northwest and is renowned for being one of the most environmentally friendly buildings in the nation.

Historic photographs for this series are provided by the Oregon Historical Society, a museum, research library, archive, and scholarly asset located in the heart of Portland’s Cultural District. View more photos of historic Portland on the new OHS Digital Collections website here.

Have an anecdote or old school photograph of you posing in front of The Armory? Post it! Don’t forget to tag #Artslandia and #ThenAndNow!