Jerry and Beth Hulsman: 50 years, Millions of Dollars, and Carrying On

It’s midafternoon on a Wednesday, and the whole of America is under home quarantine due to a global pandemic. Nevertheless, Jerry Hulsman is busy and will need to get back to me later. The 87-year-old has myriad hobbies to keep him busy at home he tells me when we speak. His wife, Beth, is at home with him, standing behind him as she has for 61 years. It’s clear from his fact-correcting follow-up call that she is every bit the woman behind the great man. She confirms this fact when I ask if the two of us might speak directly about the couple’s mind-boggling philanthropic legacy with the Oregon Symphony. “It’s all about Jerry. I’m just here behind him, as I have been for 61 years, but thanks for calling.”

Peter Frajola, Oregon Symphony associate concertmaster, is more profuse in his thoughts about the Hulsmans’ contribution. “I met Jerry & Beth 36 years ago when I first joined the Oregon Symphony, and they’ve worked their magic for us now going on 50 years! They do so much for the Symphony –– through events, concerts, and meetings, and in our office making calls –– and when Jerry calls, you answer the phone! Their tireless work has truly helped shape the Symphony.”

At the 2020 Oregon Symphony Gala, now virtual on Sunday, April 19, the Hulsmans will be honored for their 50 years of dedication to volunteer fundraising. They’ve proven there’s nothing they won’t do to support the organization, with Jerry even stepping in as interim executive director when asked.

“It is impossible to measure the impact of Jerry and Beth’s contributions to the success of the Oregon Symphony across their 50 years of involvement –– from sharing their wisdom, time, and treasure, they have left a mark on every facet of this organization. Jerry brought me to the board, and I have continually looked to him for counsel and support. He and Beth set the standard for what it is to be a steward of an arts organization,” says Oregon Symphony board chair Bob Harrison. 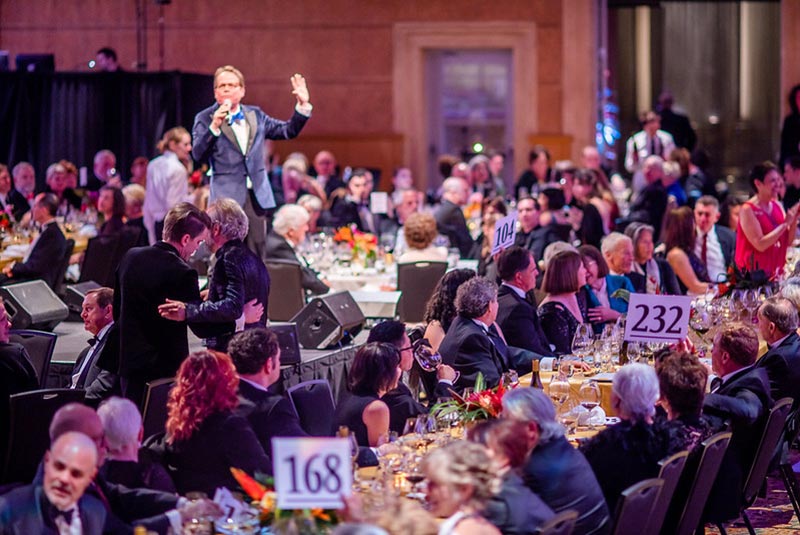 Artslandia: What sparked your interest in philanthropy and, specifically, with the Oregon Symphony?

Jerry Hulsman: Well, it was interesting. I moved back to Portland, Oregon, after spending 15 years in Washington, D.C. Coming from Oregon, I wanted to get back this way, and a job opening came up where I could be a partner in a small brokerage firm. I had three children and a wife at that time. I came back without any clients, so I needed to do something in a hurry in order to keep food on the table. Our new office happened to be in the Georgia Pacific building, and a man by the name of Frank Eisman, who was a partner in a brokerage and accounting firm, had an office next door. I ran into him in the hall and had lunch with him subsequently. And he tells me, “Hey, if you want to meet people, I’m on the board of the Symphony and happen to be heading up a certain amount of development work.” And so I said, “I’ll go to it. Let’s do that!” And I had done political work back in Washington, D.C., so I got used to meeting people. And, well, that’s the long story, but that’s how I got so interested in raising money for the Symphony. It just stuck! I got to enjoy the Symphony, and so it was a win-win situation.

Did you have any previous symphony orchestra experiences?

JH: Not much! My wife was a concert violinist, and so when I told her that I was going to help Frank Eisman run his committee, she was all for it. I really know very little about music. But I learned to love it, and it’s been a great, great part of my life.

Aside from a client base, what have you taken away from your 50 years of fundraising with the Symphony?

JH: Well, one of the things that I came away with, and I would think is one of the strongest reasons for being involved with the Symphony is that we have probably 20,000 kids go through Symphony programs every year. This is such a wonderful reason for people to get involved. Let’s say that a child is playing the violin. If they make a mistake while playing, they have to correct it. And that is, in a way, remaking their brain. We have grandchildren who have all been either in music, playing an instrument, or in a vocal group, and it’s incredible how well they did in school. Everybody that gets involved benefits from it, and I think that that’s one of the biggest reasons that I stayed in it and will continue to support it.

That’s amazing. What would you say to young philanthropists today who ask why they should put their effort toward the arts?

JH: Well, I think that you get a lot of benefit from volunteering. You don’t volunteer unless you believe in what you’re doing, and the Symphony just happened to hit because I learned a lot about it. The basic tenet of being on a board like this is that you meet a lot of wonderful people and, especially when we have 77 musicians, you’ve just got an unlimited number of people that you enjoy being around. It was, as I said, a win-win situation for me. And I was fortunate that I was able to raise some money for the Symphony.

How much would you guess you’ve raised for the Symphony by this point?

JH: Well, it’s hard to say, but it’s in the millions. One of the biggest projects that we did is –– oh, gosh, this is going back 20, 25 years ago –– the Symphony got into trouble financially. We needed to raise at least $5 million to get us out of the hole, so Ned Hayes and I raised $5 million. When we first started thinking about it, we were going to try to raise $10 million. But then a recession hit, and when we got the $5 million, the prospects dried up. That was the biggest hunk that we ever did.

JH: I’ll give Ned Hayes all the credit because he knew the people. We had five people give a million dollars apiece. So, I just went along with the ride.

JH: [Laughing] No. No. I’m currently on one board at Oregon State. I’m on the Parkinson’s board and have been for about 12 years, and I am a life member of the Foundation of Oregon State. So, I’m continuing to stay busy raising money, although it’s slowed down somewhat.

JH: Well, it takes a village to make a symphony run smoothly, and I can’t say enough about the people that are involved in the Symphony –– or I should say I could take it that they get involved in nonprofits, but particularly in the Symphony. You need a lot of help from a lot of people. We have been fortunate that we’ve had good leadership at the top and in the staff. To know how well the Symphony does now versus when I first started 50 years ago raising money for it, it’s taken a lot of good people. And it’s nice to be along!

May I ask your thoughts about the coming season?

JH: Right now, we’re just holding our breath that we’re going to have the next season because the virus is taking its toll. I feel sorry for all of the small businesses, the restaurants, and on and on that weren’t prepared for something like this. And we weren’t prepared for something like this. Nor were any of the arts. And we’re scrambling. Thankfully, we do have good management. They’re hardworking people. So, I’m keeping my fingers crossed that when September comes, we’ll be right there where we wanted to be all along.

Well, we’re right there with you, with fingers crossed as well. Thank you so much for all you do.

JH: And thank you for what you’re doing!

This piece on the Hulsmans seems a fitting end to a series on philanthropic legacies that begin in the 2019 Artslandia Annual Issue with our profile of Jordan Schnitzer. The passing of the family’s matriarch, Arlene Schnitzer, after whom the Oregon Symphony’s home concert hall poignantly reminded us of energy and dedication leaders in arts philanthropy give to this city. Take up the torch of Jerry and Beth Hulsman’s work by supporting the Oregon Symphony’s Virtual Gala 2020 with your donations and tuning April 19 at 7 p.m. for the Virtual Gala live stream!
JOIN THE GALA