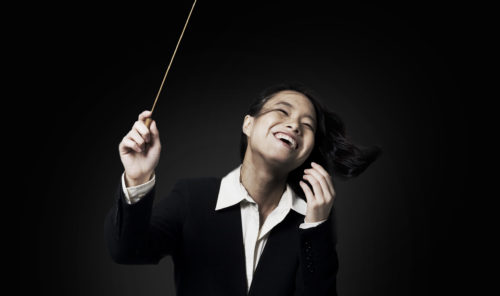 Artslandia’s conversation with barrier-busting conductor Carolyn Kuan, who’ll lead Portland Opera’s production of La Cenerentola this season, reveals our good fortune that she couldn’t settle on which instrument to play.

Two moments led Carolyn Kuan to decide—without a note of doubt—to conduct orchestras. The first occurred when she was a Smith College student. She listened to the end of the Eroica, Ludwig van Beethoven’s Symphony No. 3 in E-flat major, written when the composer was going deaf. “It was absolutely breathtaking. It moves you to places you didn’t know possible,” said Kuan, who will conduct Portland Opera’s La Cenerentola this season.

The second time that Kuan, now 41, convinced herself that she’d chosen the right path occurred in 2005, early in her career as an assistant conductor of the North Carolina Symphony in Raleigh. As part of her job, she toured throughout the state with orchestra musicians. This time, the concert was presented to a crowd of fourth-graders in a quintessential school gymnasium. After the music, she talked to the students before they climbed onto school buses to return home. They were jumping and chatting with excitement.

“Many had never experienced anything like this. The music moved them. It was as if they’d just gone to a foreign country or tasted a new dish.”

Some children might never hear another symphonic concert, but for others, a seed might have been planted. Now, six years into her job as music director of the 75-year-old Hartford Symphony Orchestra in Hartford, Connecticut, Kuan argues that if more people listened to music, we’d live in a better world: “I would have become an environmentalist if not a musician. We need that inner conservation. How do we preserve ourselves inside, make a better place for ourselves? If more people listened to music, they’d be happier.”

In her high-spirited manner on the podium, she will conduct Gioachino Rossini’s 1817 La Cenerentola (Cinderella or Goodness Triumphant) from July 13–28 in the Newmark Theatre. Rossini wrote the exuberant opera in three weeks, off the tailwind of his highly successful The Barber of Seville.

“We needed someone with a lot of energy to conduct this opera,” said 15-year Portland Opera General Director Christopher Mattaliano, who will direct the piece. And energy Kuan has, for many kinds of music.

She and Mattaliano met when he saw and heard her conduct the American premiere of Philip Glass’s The Trial, based on the dark Franz Kafka story, for the Opera Theatre of Saint Louis in June 2017. Mattaliano was impressed with her style and musical interpretation. The two talked at a post-opera reception and then later at a diner where they ran into each other when struck by late-night hunger. Impressed with Mattaliano’s “energy and the way he thinks,” Kuan agreed to come to Portland.

“She’s very gifted. She’s a special person,” Mattaliano said about Kuan, adding that Portland Opera “tries to make sure we have female conductors on a regular basis. We’re committed to getting as diverse a casting pool as we can. It’s always about talent, but our stage should reflect the world we’re living in.”

Kuan grew up in Taipei, Taiwan (officially the Republic of China), and played piano from the age of five (a natural for a “good Asian girl when your parents want to marry you off well,” she half-joked, adding that flower-arranging, ballet, and theater lessons were part of an Asian girl’s “well rounded” middle-class education). She shared her older brother Michael’s piano—a gift for his 10th birthday. (Michael Kuan works in finance in Hong Kong these days and can play “a couple of tunes,” Kuan teases.) After piano, she added the violin, then the flute. She sang seriously for 10 to 12 years, thinking about becoming an opera star, and played harp for awhile—and trumpet for a day.

Confessing that she had trouble settling on which instrument to stick with, Kuan reflects: “It was perfect that I ended up as a conductor.” As a conductor, she could “play” all the instruments.

At 14, she traveled to the United States to attend Massachusetts’ Northfield Mount Hermon School (a sister school to her Taipei school). She wouldn’t have imagined becoming a conductor had she stayed in Taiwan, she says. In the United States, she was encouraged to ask questions, a completely different approach from her former school’s methods of memorization and rote learning. When she decided to stay in the United States—and she has lived here for almost 30 years—she initially fell in love with the “U.S. education system,” not with the prospect of becoming a musician. At least at that point. “I never intended to be a professional musician.”

After boarding school, she applied to Smith College in Massachusetts, was rejected, and then applied again (“I’m stubborn”). When she does alumnae events at Smith, she often reminds students that she had to apply more than once. She graduated cum laude from the Seven Sisters liberal arts college, where her parents pushed her to study investment banking, despite her musical interests. She demurred somewhat to her family and double-majored in economics and music. She considered a triple discipline—computer science—but music marched on as her primary interest. After Smith, she went on to earn a master’s in music from University of Illinois and a performance certificate from the Peabody Institute in Baltimore.

Her love for music, combined with her rebelliousness—as she calls her determination to follow her heart—along with her lifelong drive to “improve and be better,” kept her on her conducting path, though it is a constant journey of learning and revision. “The more I know, the less I feel I know. Being a conductor is a significant responsibility, and it is so much more than just about music. It is also about life.”

It’s not lost on her that she stands out. She is a young, Asian, female conductor in the agonizingly slow-to-change, white-male-dominated, classical music world, where few women hold the baton. “As a musician, I want people to focus on the music and not what I look like. At the same time, I’m proud to be young, Asian, and female. We live in a society with many unspoken stereotypes. We may not like to admit it, but it is a challenge, and I am grateful for the people who have believed in me and have given me opportunities.”

And yet, the opportunities come slowly to women who want to conduct. She and her colleagues conclude that American voters will elect a female president before a woman is chosen to lead one of the “Big Five” orchestras: Boston, New York, Philadelphia, Cleveland, and Chicago.

“This takes time. It’s not surprising,” she said, though she realizes her good fortune to have such mentors as Marin Alsop, the dynamic conductor of the Baltimore Symphony Orchestra since 2007 (and former music director of the Eugene Symphony), to help her to navigate her artistic way. Aside from being a mentor, Alsop is a friend and a mother figure to Kuan, who lost her mom when she was 18.

The two met at a workshop where Alsop, the first woman to conduct a major North American orchestra, said she was “immediately struck” by Kuan’s “natural talent and musicality.” Kuan was hired in 2003 as Alsop’s assistant at the Cabrillo Festival of Contemporary Music in Santa Cruz, California—two summer weeks of standard-making and standard-breaking contemporary music—and continued until 2012. During that stretch, Kuan developed a “true love for new music and living composers,” said Alsop, who recently has been named the 2019 chief conductor for the ORF Vienna Radio Symphony Orchestra, known for its innovative and bold programming.

The year 2003 also included Kuan’s win of the Herbert von Karajan Conducting Fellowship, which gave her a 2004 Salzburg Festival residency. She was the first woman to take home that prize. In 2006, she was hired as assistant conductor of the Seattle Symphony, and in 2007, was promoted to associate conductor.

After singing seriously for a decade or more, Kuan especially loves to work with contemporary opera. She conducted the ambitious American premiere of Dr. Sun Yat-sen, composed by Chinese born, American composer Huang Ruo for the Santa Fe Opera in 2014, as well as the 2017 production of The Trial in St. Louis, where she and Mattaliano met. “It is amazing to be on the team that tries to figure out how best to do the opera and how best to connect with the audience in our time. Interestingly, the more contemporary operas I do, the more I develop perspective on traditional opera. As artists, we try to ask certain questions and share our thoughts through our work. Often, we explore the same questions in new as well as old operas.”

Aside from opera and orchestral music, her passion for contemporary and Asian works is a strong theme for her. In early 2018, she conducted two Chinese New Year concerts for the Toronto Symphony Orchestra and, before that, led several symphonic world premieres at Toronto’s New Creations Festival. From 2007 to 2012, she directed the San Francisco Symphony’s Chinese New Year concerts and later helped to launch and lead Seattle’s Celebrate Asia program representing eight Asian cultures. She has conducted multimedia productions of the Butterfly Lovers’ Violin Concerto and A Monkey’s Tale as part of Detroit Symphony Orchestra’s world music program.

Because a music conductor doesn’t make a sound onstage—except maybe turning the pages of the score—she must communicate to the musicians and audience the music’s excitement and passion without saying a word. She must inspire “the musicians to internalize [the music] and give it to the audience,” Kuan said. Kuan argues that it’s essential when conducting to understand what a composer meant to express, “to get into a composer’s head and to bring their work to life.” Yet, it’s equally important for audiences to experience new music, even though they don’t have to embrace every piece they hear. “Dialogue is fascinating. Music is one of the most direct ways to share new experiences.”

“Versatile” is a consistent word that critics and colleagues use to describe Kuan, an adjective that keeps her from being trapped in any kind of musical box. Her first job was with the New York City Ballet, and her first Nutcracker at the Lincoln Center went on without her rehearsing with the orchestra. As much as she loves the ballet, symphony, opera, and multimedia projects, she has a new fervor for conducting live orchestral music to such movies as The Red Violin and Star Wars IV.

“I think Carolyn will succeed in many realms of conducting— from standard rep to opera to new music and multimedia,” Alsop said. “The sky is the limit for her!”