On a High Note: Zach Galatis

y the time you finish reading his interview, it will come as no surprise that The Oregonian noted the “irresistible energy, appealing tone, and dazzling technique” of Zach Galatis. Piccolo and flute of the Oregon Symphony since 2012, Galatis wears his passion (and humor) on his sleeve. His resume is long and distinguished, and while he advises not to recite one’s credentials habitually, his fans should know that he plays with Third Angle and 45th Parallel. He’s won copious awards, teaches prolifically, and performs as a guest of many orchestras and various summer festivals. Galatis graduated summa cum laude with performance honors from the Crane School of Music at suny Potsdam and earned a master’s degree and performance diploma from the Peabody Conservatory of Johns Hopkins University.

What’s your first memory of a live music performance?

The first real, indelible memory I have of a live music performance was going to one of those youth concerts at the orchestra where I grew up, just like the ones that Oregon Symphony does. I was probably in kindergarten or so, and the orchestra featured a high school-aged soloist who had won a competition to play a concerto with them. I was totally hooked and decided that I wanted to do that someday, too. When I was a senior in high school, I won that same concerto competition, and I got to play a concerto with the orchestra. I hope that I inspired some young musicians the same way I was inspired! Even better, I get to do those concerts on a regular basis each season with the Oregon Symphony, and we reach thousands of children this way, which I think is super cool.

How did you come to play the piccolo? Can you describe your first experience of being drawn to it?

I started out on flute in school in the fourth grade. After a little while, I realized I was one of many and not standing out at all (in school band there are a bunch of flutes – not just a couple like in an orchestra). I decided this was unacceptable, and that the only option was to play something even higher, louder, and more noticeable. We all joke that instruments and their players have predictable characteristics. I definitely wanted to be heard and be heard a lot! What does that say about me, anyway? To this day, I love the way the piccolo stands out in orchestra, and I love the multiple roles that it can play in orchestral music. Being a piccolo player also requires a certain amount of self-confidence and nerve, since you are always heard and often playing very exposed and difficult parts after sitting and not playing for long periods of time. For instance, in Beethoven’s Ninth Symphony the piccolo player doesn’t play a note until over 45 minutes have gone by and then has to play a difficult and delicate solo!

What role do you think music education plays for young people? What are your thoughts on the current state of music instruction in our public education system?

I’m going to say this slowly and nice and loud for everyone sitting in the back: Music. Education. Is. Essential. For. All. Kids.

I am proud to be a part of the Oregon Symphony’s educational outreach, whether it’s as a part of the orchestra for our Kids Concerts or taking a quintet around to the elementary schools and showing all the kids our instruments. Getting kids fired up about music and expressing themselves in that way is so important, and they need it to fuel their brains for other things! In Mr. Holland’s Opus, the movie where Richard Dreyfuss plays a composer who begrudgingly takes a band teaching job at the public high school (filmed in Portland!) and then does it for the rest of his career, he’s fighting the people in charge who want to make cuts to all the arts programs. He says, sure they need reading and writing class, but without music and art, “pretty soon these kids won’t have anything to read and write about!” Boom. Mic drop. Fund music education.

What advice do you give to aspiring professional musicians, in general, and flutists, in particular?

Well, the obvious: practice, practice, practice. Use a tuner and a metronome, and learn to play in tune and in time! Work very hard and take in information and influences from all types of genres and artists, and be completely open to criticism and critique from musicians you know and respect. Figure out how to make your strengths marketable – make great connections with people in your musical community – and don’t burn any bridges! At the same time, don’t get in the habit of reading your resume every time you meet new people in your field (I hate that). For flutists in particular, don’t be afraid of the piccolo! It can be a beast, but figure out how to tame it and learn to love it – as a freelancer you will get twice as much work that way.

How much time do you spend practicing? Where are you most often when you practice?

I am a firm believer in the importance of how well you practice, not how much. I practice exactly as much as I need to (and no more) for whatever it is I’m preparing. I can get more done in 10 minutes of really focused, goal-oriented practicing than some people can get done in hours. In this way, I make the best use of my time when preparing the mountain of repertoire that we have to get through in an Oregon Symphony season. There are some programs that I can look through the folder in one short sitting, and I’ll be fine. Other weeks, I woodshed difficult technique for hours! It just depends. When my partner and I were house hunting, one of the things that was most important to me was having a special space in the house that was just for my work. So, I have exactly that – a music studio, which is my teaching and practicing space. It’s a great room with awesome acoustics (perhaps too good!) that gives me a dedicated place to get my work done. 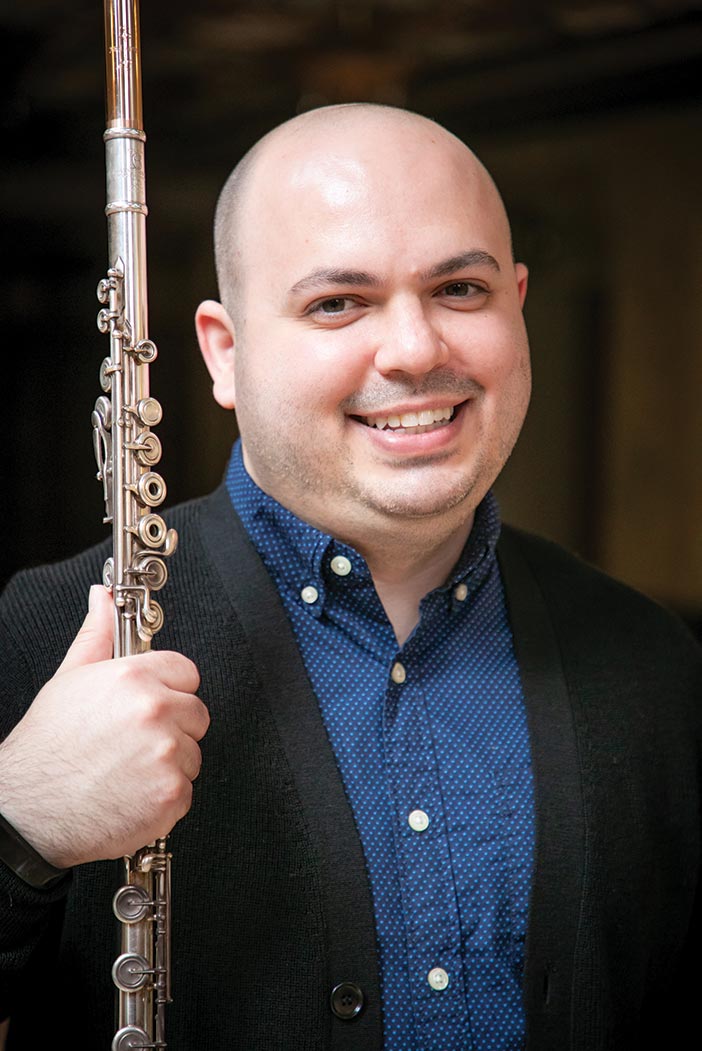 What’s the funniest thing that’s ever happened during an Oregon Symphony performance?

This is a pretty good story. A bunch of players onstage utilize earplugs to protect their hearing. I use them a good deal of the time, since I’m the piccolo player, and my playing can be on the very loud and high side. One set of plugs was made in two parts, like a casing and filter that fit into it. During one concert, one of them came apart, leaving half the earplug stuck in my ear, and I couldn’t get it out! I was sort of panicking, totally catastrophizing that I’d have to go to the hospital to have it removed. My colleague sitting next to me was cool and collected; she asked our principal oboist for tweezers or pliers out of his reed case, and she went to work to remove it from my ear. From the audience, it probably looked like she was doing surgery. She got it out!

Are there any other genres or art forms you’d like to explore?

I have a deep love of musical theater and singing, and in some alternate universe, I think I probably went in that direction instead of the flute. Maybe in that universe, I’m taller and can dance, too.

Of all the places you’ve performed, what’s your favorite venue? Your favorite audience? What made it so?

Last year, I had the awesome opportunity to go play as guest principal flute with the Buffalo Philharmonic as they toured Poland as part of the Polish Beethoven Festival. We played in several stunning orchestra halls, some of which were very old, and some of which were state-of-the-art and brand new. Europe and the arts, people! In terms of a favorite audience, I am grateful for any audience that is interested, engaged, and appreciative of the music we make. Just like a tree falling in a forest may make no sound if nobody’s around, an orchestra would have no purpose if not for the audience.

The Oregon Symphony has an incredible and supportive one here in Portland, which we can feel onstage.

What do you find most challenging about being a professional musician?

I think I’ve gotten to a good place on this at this point in my career, but I think finding balance in life is a huge hurdle for professional musicians. Due to the nature of what we do, the fact that it’s art and so intensely personal, I think it becomes so much more than just a “job” for most of us. In that way, it’s hard to separate it from the rest of our lives. I love being a professional musician, making music, affecting people’s lives – and then going home and being a normal person who likes to binge watch TV or play board games.

What music do you like to listen to in your free time?

I’m really, really good at leaving work at work, whether that be at the concert hall or in the practice room. I basically never listen to classical music in my recreational time, which is almost scandalizing to some people. I listen to pop music (and unabashedly love it) all the time. I love singer-songwriters, and I’m a huge fan of Sara Bareilles, Ingrid Michaelson, and Lady Gaga. But most often, if you opened the Spotify app on my phone, you’d find a Broadway musical playing. I get obsessed with one show at a time, and my poor partner has to endure songs and albums on repeat ad nauseam at home as I work through my obsession. Sorry, Matt! (He’s the best and never complains.)

What are your thoughts on concert dress in the 21st century?

I strongly believe that the days of tails, tuxedos, and ballgowns are over. Historically, orchestras dressed up in formalwear so as to not be out-dressed by the audiences of the day. This just isn’t the case anymore, by and large, and especially not in a city as laid-back and casual as Portland. Sure, there are some people who dress up to come to the Symphony and the Opera, and I think that’s great! I love a snazzy bowtie (unless I’m performing – I need to breathe!). But a bunch of forward-thinking orchestras are starting to update and go for simpler, cleaner, more modern looks. Not only does this speak to a new, younger, hipper audience, but it also looks so much less stuffy. I think this is the way of the future, and I’m hoping that the Oregon Symphony will follow this trend.

What do you do for fun and relaxation outside of music?

I remember being so frustrated at the question of “what do you do for fun” when I was out dating. Give me a break! What I do for a living is the interesting part of my life! I’m boring otherwise! Seriously, though, our house is full of board games. We’ve got any game you can think of, and it’s one of my favorite things to do to unwind. I also have absolutely no shame to admit my love of TV. At any given time, there are several shows that we’re watching, binging, or re-watching (currently two seasons into Lost for the second time). I’m an extremely passionate karaoke-er. As in, if you think about anything in anybody’s life that they’re passionate about, double it, and that’s me with karaoke. That isn’t “outside of music” exactly, but since it’s outside of the flute, I think it counts. I sing anything from Billy Joel and ’90s boy bands to Mariah Carey and Celine Dion. And no, I don’t transpose anything. #originalkeysonly.